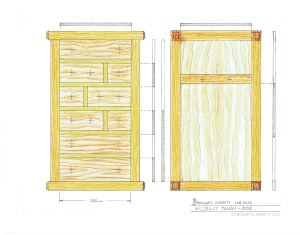 I spent Saturday completing the side rail joinery.  Basically just more of the same like I posted in Progress 5.  With the side rails completed, I turned my attention to the front and rear bearers.

The first step was to cut the five rear and the five front bearers to rough length.  This length is taken from the full-scale shop drawing.  Adding additional length for the tenons on each end.  Then I surface dressed all the pieces.  Using one piece for a master, I once again turned to the full-scale shop drawing to establish the absolute distance between the tenons.  I then clamped all the pieces together and marked the rest of the pieces from the master. 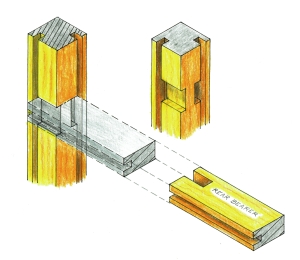 I began with the joinery for the rear bearers.  The joinery for these is a little simpler and gave me a chance to warm up.  The joint is a modified saddle joint.  By adding the housed portion to the mortise and tenon, a great deal more rigidity is achieved.  It also creates additional support for the drawer as well as ensuring the post is held square.

OK, back to the rear bearer.  The layout of the joinery is done with my purpose built gauge. 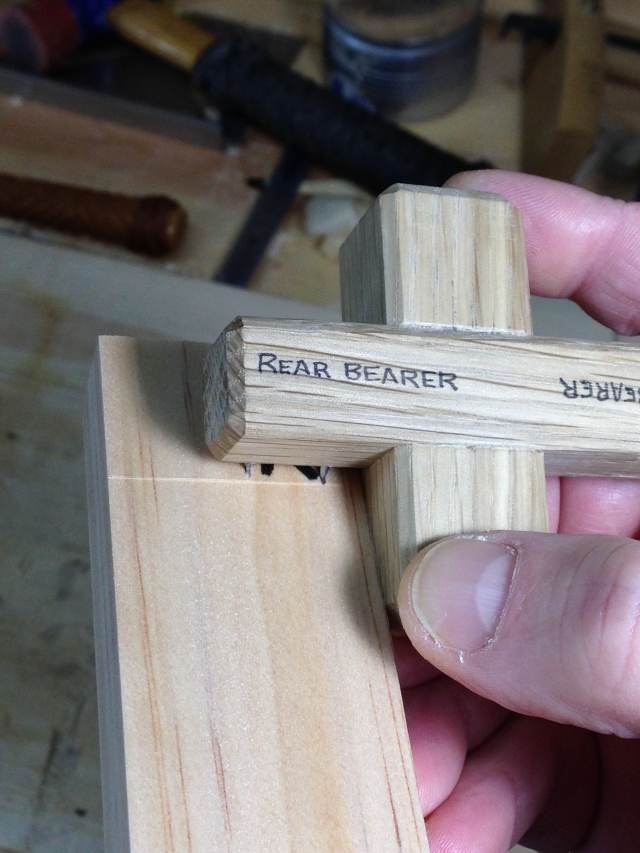 First order of business is to saw the walls.  Note the reflection in the saw.  My sawing is getting better and I’m consistently sawing square. 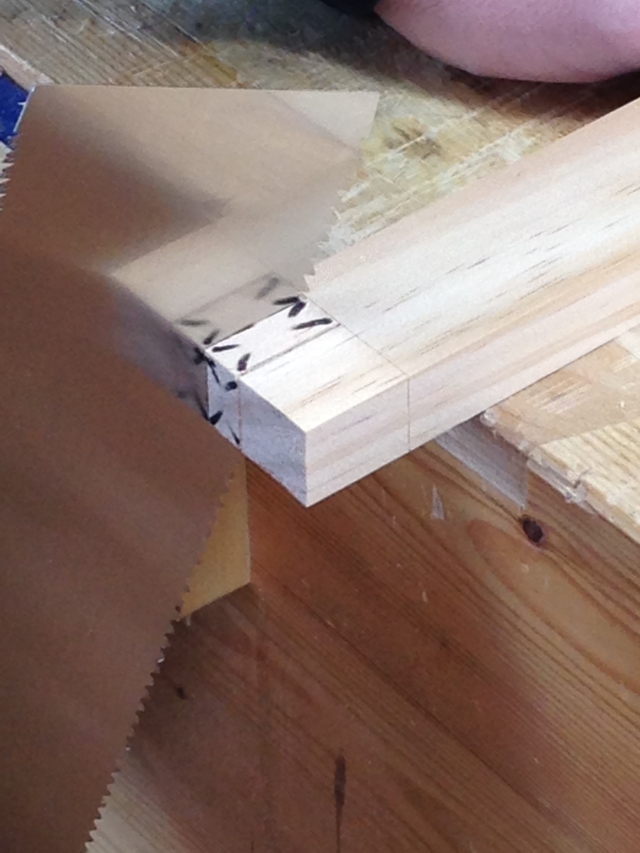 Then chisel out the waste. 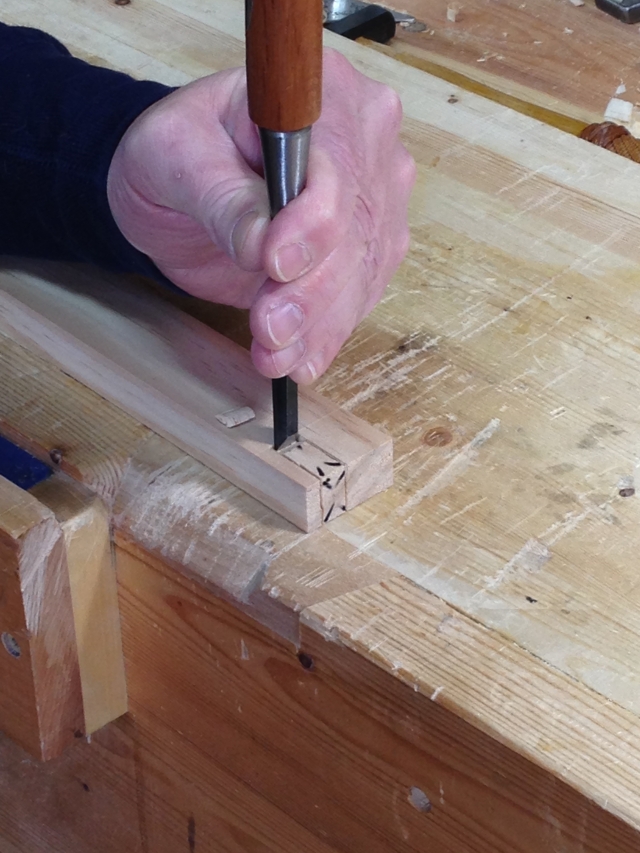 I always chamfer all of the leading edges to avoid any hangups when assembling the joints. 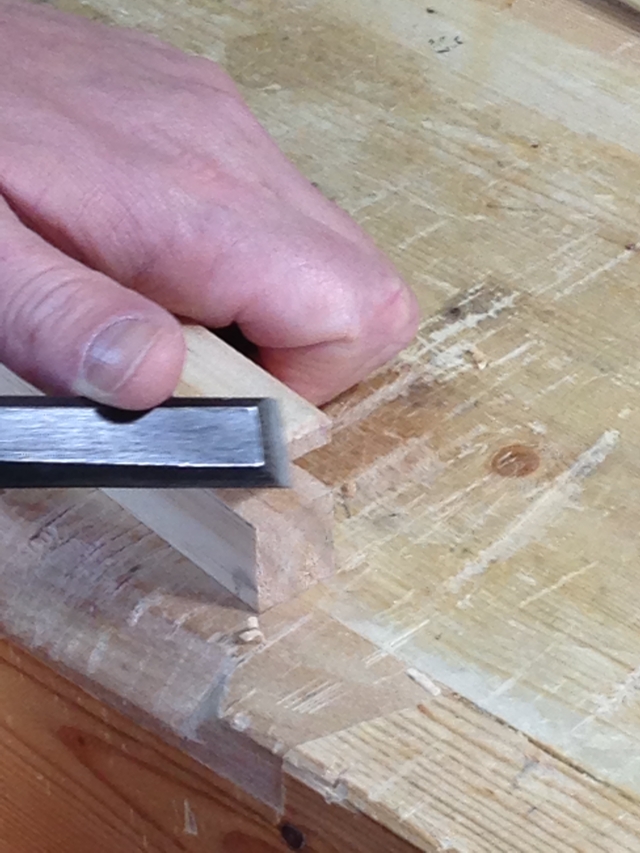 Lets see if it fits straight off the saw. 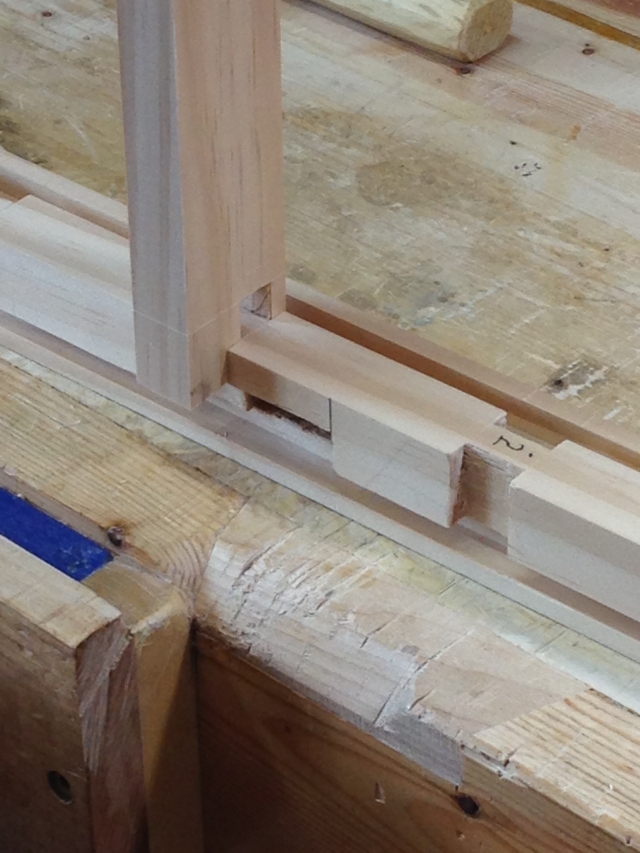 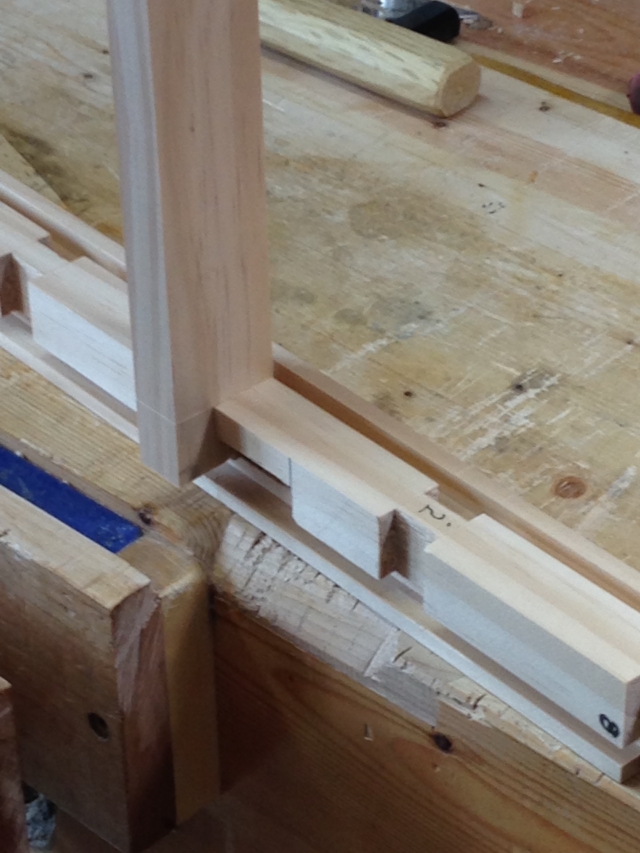 Once I had all of the joints cut and fitted I needed to add a groove to each of the pieces.  This groove will eventually hold both the side drawer bearers and the dust panels. 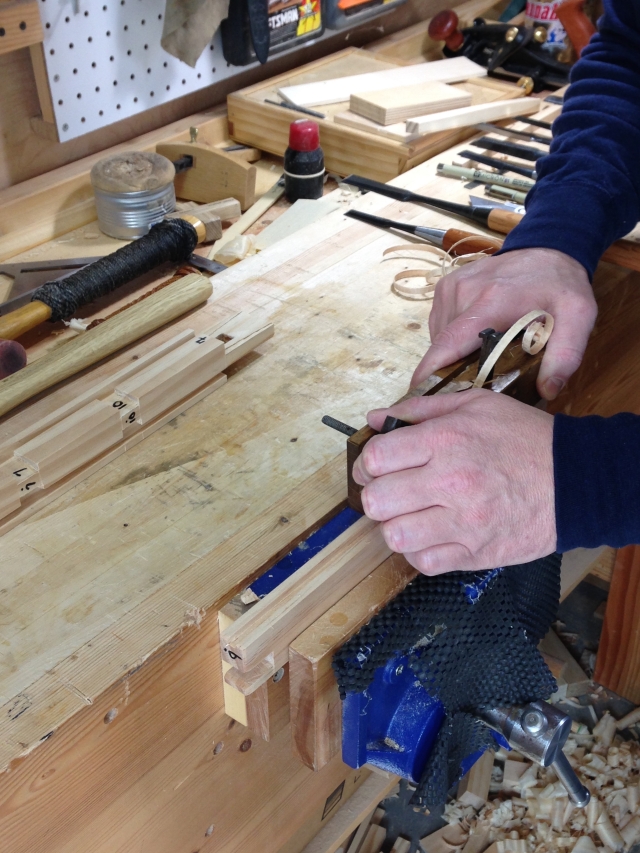 Finally a dry fit of the rear frame assembly. 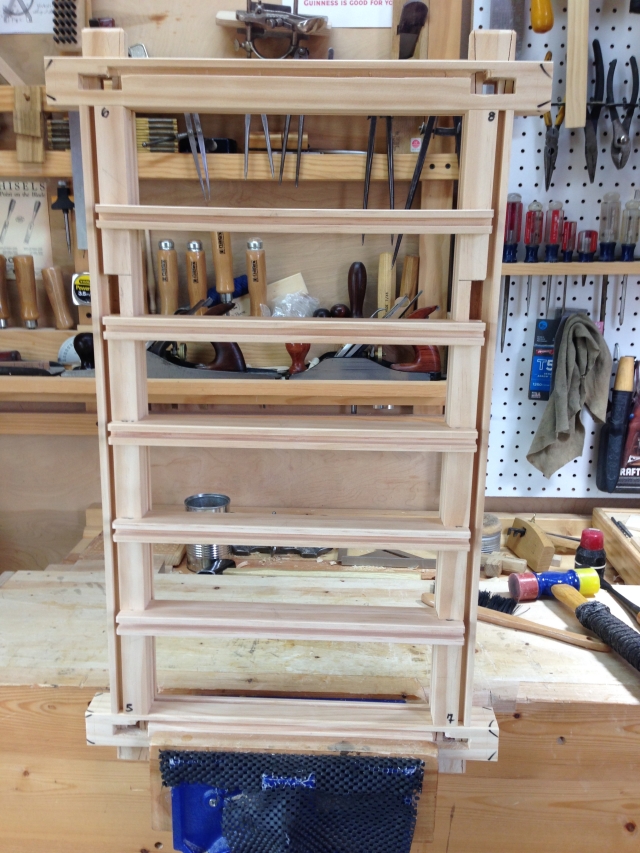 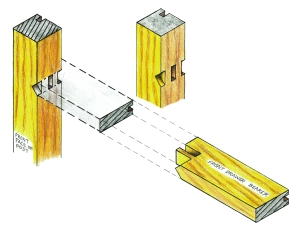 The joint is pretty simple to cut.  The one thing that I have yet to do is create a paring guide.  The guide would make any trimming a lot less nerve-wracking.  But for this set of joints I just went freehand.

Like with the rear bearer, I began with the gauge. 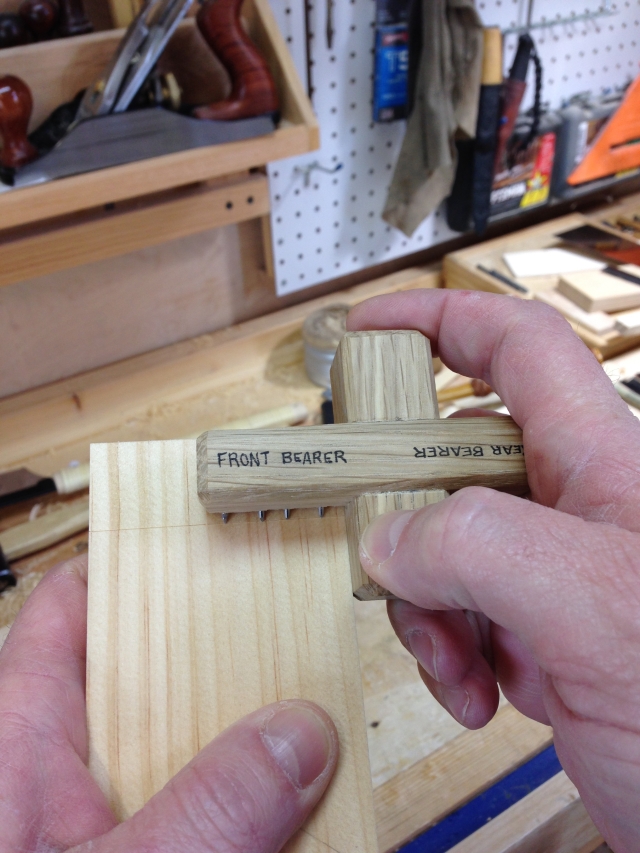 A joint marked and ready for cutting. 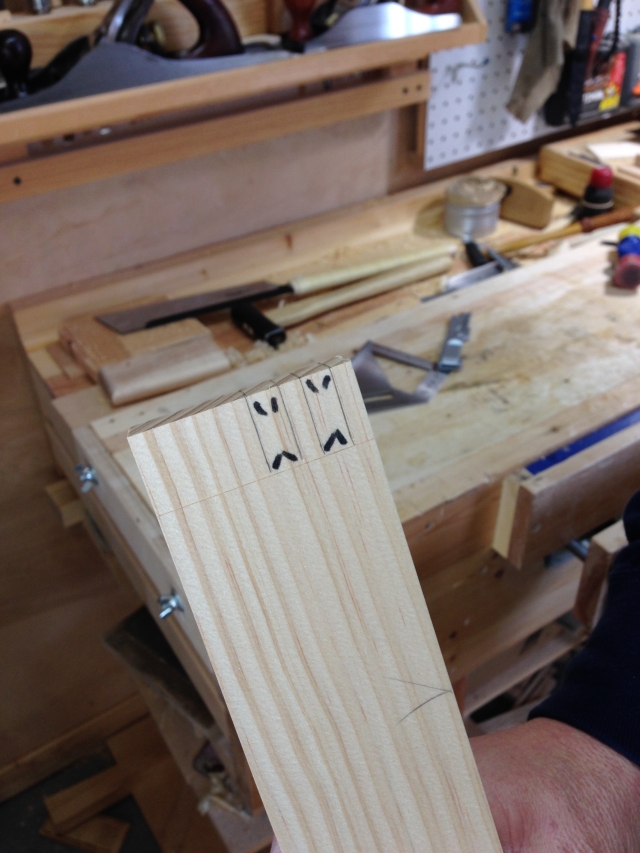 To lay out the bird’s beak I use a miter square and a knife.  The knife registers in the shoulder  knife line and I slide the miter square up to it. 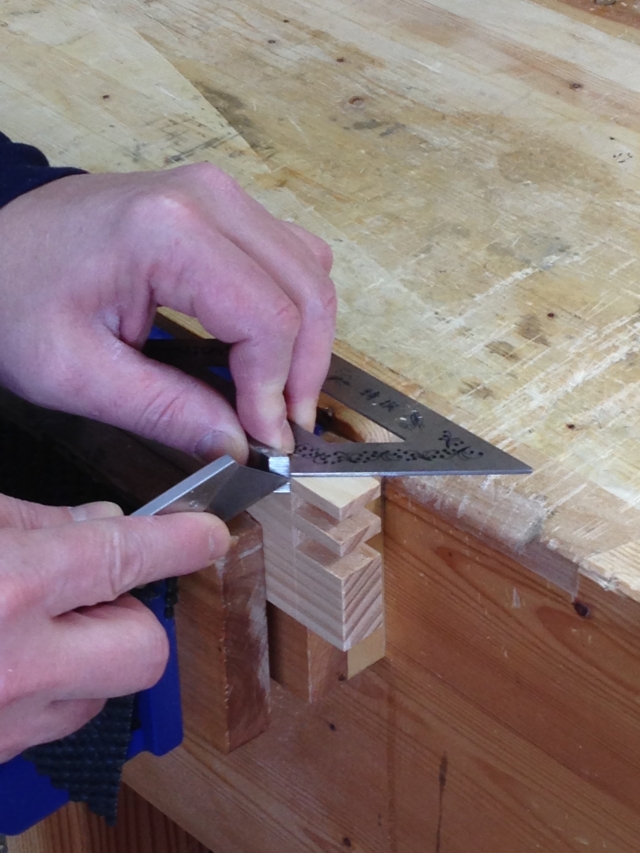 Then flip the miter square to the opposite side. 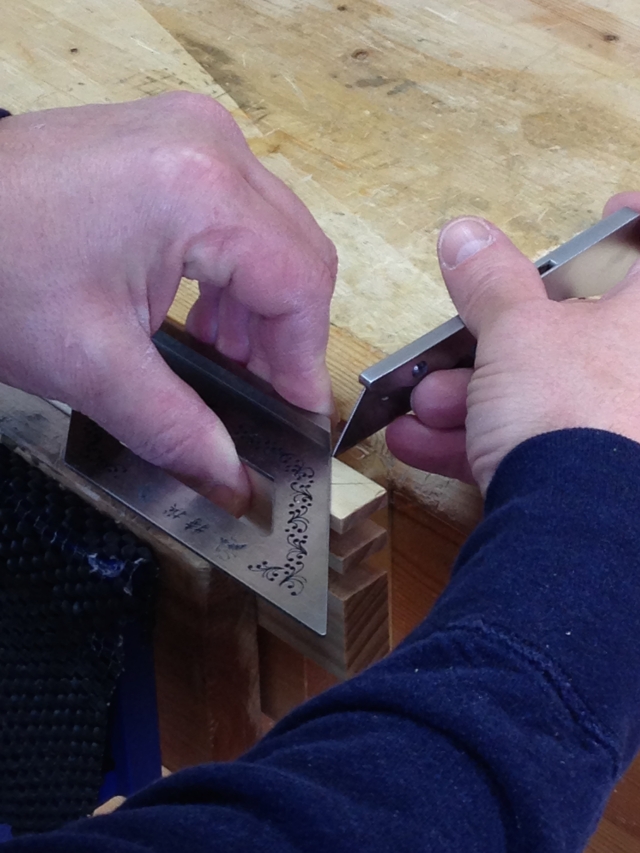 I then used a chisel to create a trough for the saw and sawed the waste. 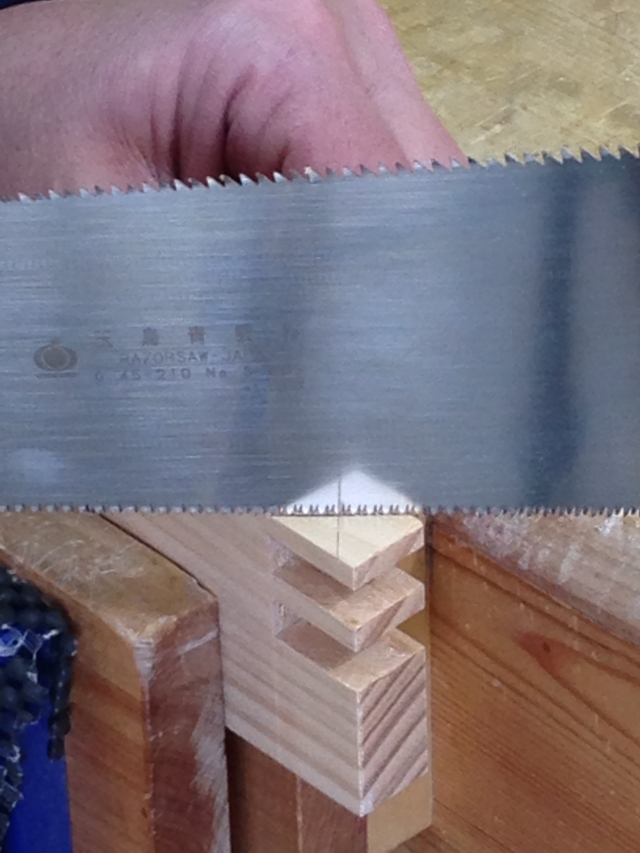 Light paring is usually all that is needed.  Just enough to remove any discrepancy between the knifed line and the sawn waste.  So went the procedure for all of the front bearers.  Once the joinery was cut, these pieces also received a groove same as the rear bearer.

A dry fit of the front frame assembly.  I still need to fiddle with a couple of the bird’s beak joints.  Clamp pressure draws all of them tight, but I feel better about it if the set tight without the need of clamp pressure.  Maybe I’ll make that paring guide before I tackle the final fitting. 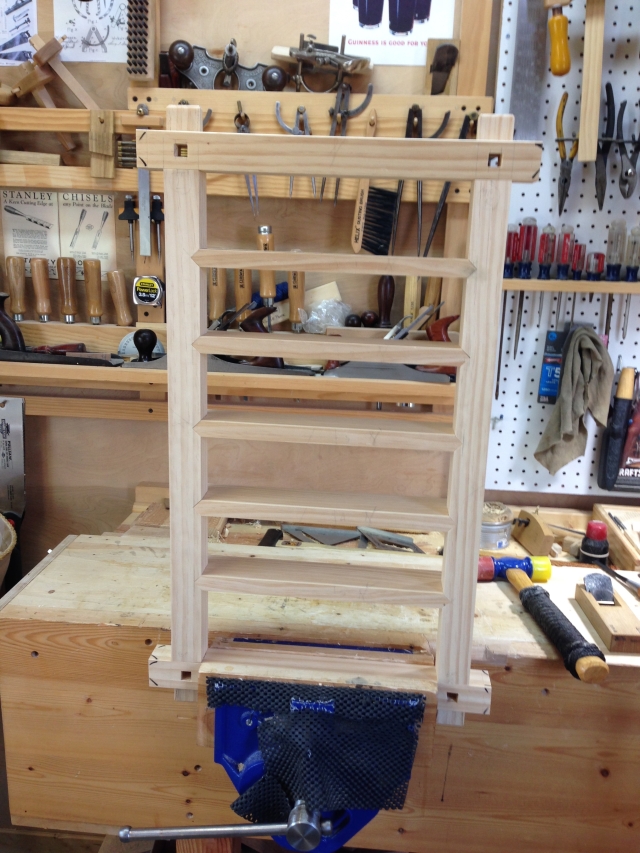 I couldn’t resist a dry fit of all the components that are completed to this point. 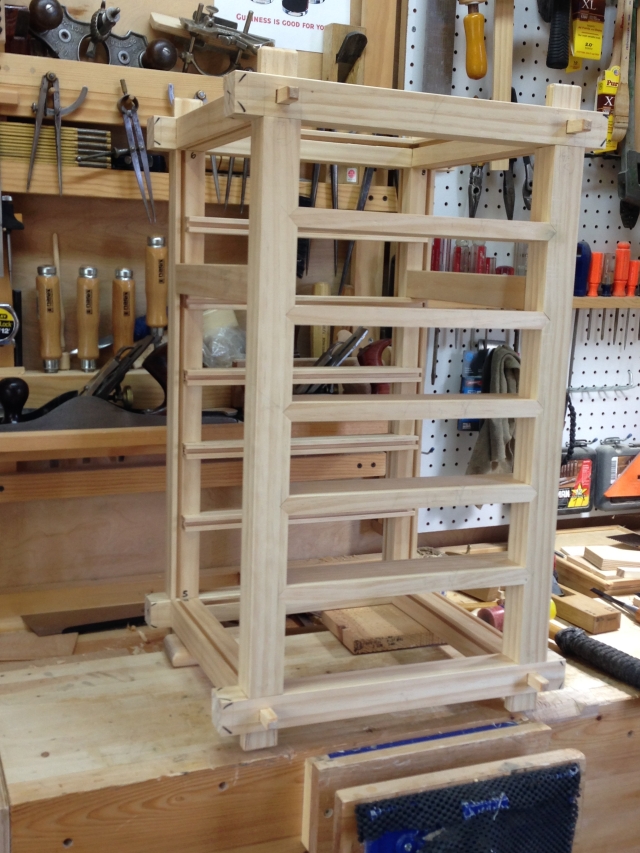 I have deliberately changed from my normal sequence on this build.  Normally I would have completed and glued the front and rear frames before moving on to the side rails.  I changed it up this time because I want to get some photos of the entire frame assembly sans panels.  It still amazes me just how rigid this assembly becomes when it’s assembled.

Still a lot to do.  So more yet to come.