This blog has been quiet as of late, which usually indicates that not much is happening in my wood shop.  In this instance though, that is not the case.  I’ve been in the shop almost everyday trying to get my head around the Japanese kanna.  I’ve made a few dai (plane bodies), tried different bedding angles and made several mounds of shavings.  I’ve also had a couple of email conversations with folks well-versed in the kanna.  These conversations have led me to abandon my original idea of using the kanna without the chip breaker.

While I enjoyed success with my first attempts of creating a kanna with a slightly higher bedding angle and no chip breaker, I was assured that such a configuration would eventually lead to frustration.  Plus I was sacrificing surface quality with the higher bedding angles.  Not that the surfaces I was producing were poor, they were as good if not slightly better than those I could get with a standard #4 smoother.  By lowering the bedding angle however, I found that the surface produced was dramatically better.

Another issue I have been working through is to discover the cutting characteristics of the blades that I have.   Unlike most western plane blades, Japanese blades very widely in material and cutting ability.  Japanese plane blades are typically a lamination of hard steel forge welded to a soft steel or iron backer.  Each blacksmith has formulations for the blade steel and backer that they feel is best suited for certain applications.  This results in a myriad of possible combinations.  I now have three 65mm blades and there is a marked difference in their performance.  One is softer and easy to sharpen.  Making it a perfect candidate to become the workhorse of the three.  The middle of the three is a little tougher and produces a decent surface finish.  This one will be my truing/jointing plane.  The newest of the three is a used blade I recently purchased off of eBay.  This blade is by far better than the other two and will be my smoothing/finishing plane.

Yet another issue is the material for the dai itself.  I could easily order Japanese white oak blocks, but they are spendy and I am frugal.  A quality block of Japanese white oak for a 65mm blade will easily run $60 or more. I have American (eastern) white oak and it works OK, but my stock is on the thin side and the wood turns dark when oiled.  That dark color makes it difficult to sight the blade across the sole for adjustments.  So I rummaged around in the magic attic and emerged with what turned out to be a plank of hard maple 1-3/4″ thick x ~12″wide x ~36″ long.  So maple is what I will be using for this next build.

The eBay blade from Japan that I just received is by far the best of my three blades.  It doesn’t seem to have seen much use.  The seller guesses the blade is blue steel laminated to soft iron.  The brand name is Kuninori, but it is not signed by a blacksmith.  The chip breaker is a standard stamped steel affair, but works as intended. 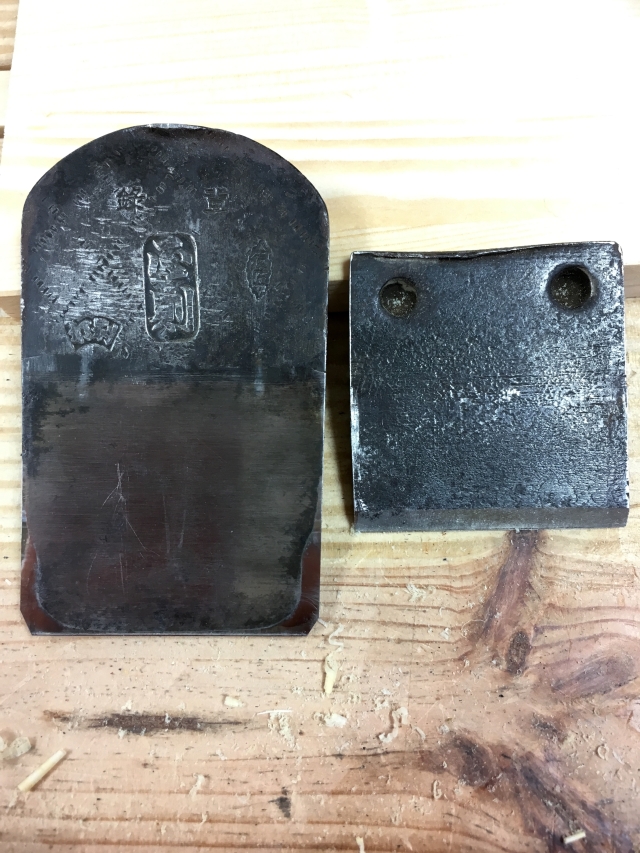 The first step was to prepare a block of the maple.  I cut it close to finished length, width and thickness.  Then I squared it up.  Once the block was ready I completed the layout.  The bedding angle for this plane will be 40deg.  I have been slowly accumulating bits and pieces of information on the layout for kanna and have worked out a charted proportional layout method that seems to work.  It’s not quite ready for public consumption, but I should have it ready soon. 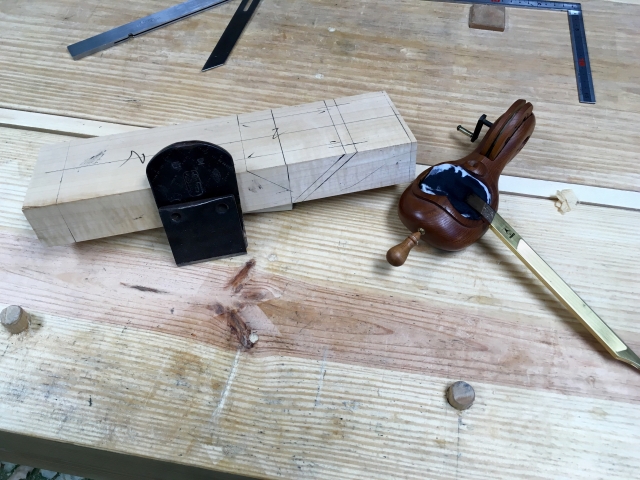 I like to start by chopping the mouth opening first.  I’m sure there are arguments for chopping the blade ramp and escapement first, but this works for me. 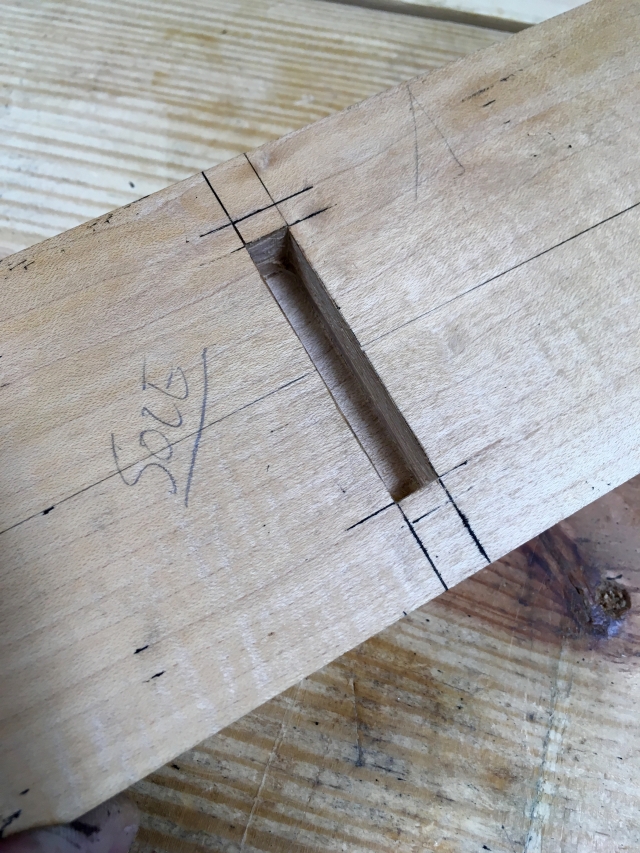 Then I flipped the block over and chopped the blade ramp and escapement.  Then cut the slots that secure the wedge-shaped blade.  My apologies, but I neglected to take photos of that part of the process.  Plus I’m still not comfortable that I’m correct in my process.  So I’ll jump to a shot of fitting the blade. 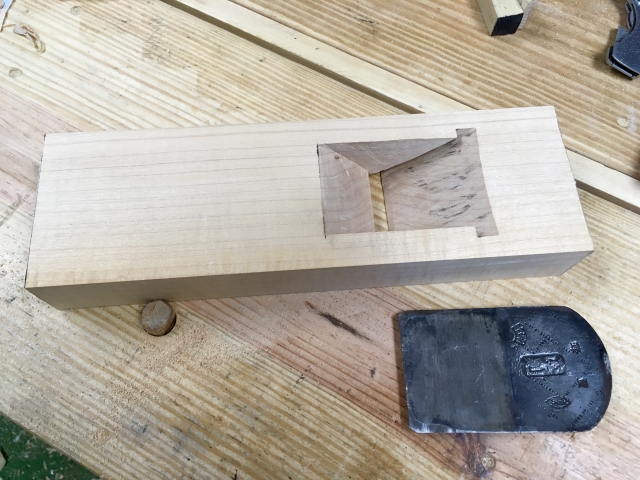 Pin and chip breaker installed.  Then a quick test cut, because I can’t help myself.

I start conditioning the sole on sandpaper adhered to a glass plate.

Then refine the conditioning with a scraper plane.  I set this kanna up as a smoothing plane which means two contact points.

I wont be winning any planing contests, but this will work for me. 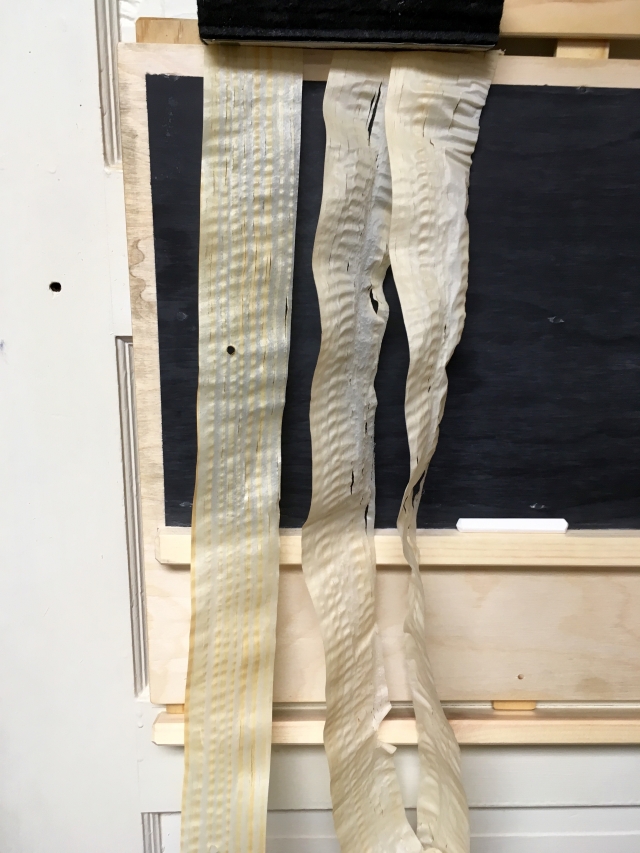 I’ll refine the conditioning a little as I go, but I’m pretty happy with how this one turned out.  Next up I’ll tackle the jointer.

16 Responses to Birthing a Hira-Kanna(common plane)