I took a day of vacation today so that I could squeeze out a four-day weekend with Monday’s holiday.  Today’s plans included only two things.  Install the handles and build the sliding doors for the HB Tansu.  Simple and easy….not so much.

I have been working on the handles over the past several evening and finally finished them last night.  So I took them out into the shop this morning at 7am and started the installation.  Pretty straight forward stuff, thread the loose cords through the holes in the handle rails, tie them off, lock the knot with CA glue and trim off the excess cord.  The process went smoothly and exactly as planned.  Both handles were installed in less than twenty minutes and I was feeling a little full of myself.

“Hell, I should have the doors built and in the clamps by noon, no problem.”

I measured the opening in the tansu that was to receive the sliding doors.  I then measured again  to verify my first efforts.  You know the saying.  The doors need to be 10mm taller than the opening to account for the grooves that house them.  Since there is a 3mm tongue at the bottom and a 10mm tongue at the top, the bottom and top rails need to have this extra width in order to keep the finished reveal the same all around the door.  One additional hiccup is that the center stiles should exactly overlap each other in the center of the opening.

“I’ve got this under control.”

I opted to skip my standard practice of creating a full size layout drawing and went straight into cutting the parts.  With all the parts cut to rough length and surface planed, I began the layout on the stiles.  Then I moved on to the top and bottom rails.  With the layout completed it was time to start chopping mortises.  I opted to build just one door at a time and began by plowing grooves in each piece.  No problem.  Then I chopped the (4) required mortises, (2) in each stile.  With that out of the way, I sawed the required tenons in the top and bottom rails.  Everything went together perfectly.  With the frame dry-fit together I checked it against the opening.

The frame was exactly 20mm too tall for the opening.  Not 10mm like its supposed to be but 20mm.  A little measuring revealed where my error was on the layout of the stiles.  So I cut (2) new stiles and surfaced plane them.  Then I pulled out my layout board and created a full-size layout of the doors.  I used this to re-layout the stiles.  Correctly this time.  I chopped the mortices and had the frame back together.  Checked it against the opening and it was 10mm taller than the opening.  Perfect.  I repeated the process with the other frame and it too came together just fine.  Then I checked them in the opening with the doors overlapping each other. 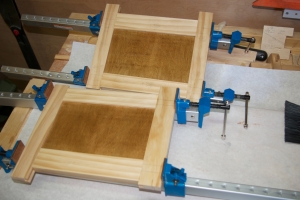 The (2) center stiles came short of overlapping each other by about 0.5mm.  This left me nothing for cleanup and fitting later.  So I made yet another stile.  This one I made 3mm wider than all the rest.  This will be the one that I plane to width last when fitting the doors to the opening and to each other. 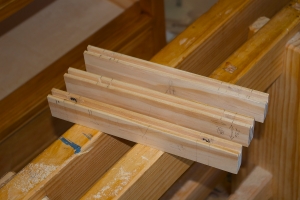 The innocent victims of my carelessness.

Not my finest day of woodworking, not by a long shot.  It was after 6pm before I managed to get the doors assembled, glued and in the clamps.  Tomorrow I’ll tackle the fitting of the doors and will take care not to screw them up.