Ditty Bag with a Wooden Bottom-Progress 1

Back in the golden age of sailing ships every sailor worth his salt had a canvas ditty bag.  This was a small thing typically 7″ in diameter and 14″ tall.  In it the sailor kept a few personal treasures, bits of cloth, buttons, twine and tools.  With the contents he was able to keep his personal clothing in good repair and was able to make repairs to the ships sails as well.  This last bit was of paramount importance to a
ship powered solely by sail.

Much like the joinery apprentice would build a tool chest as a right of passage, the new sailor would make a ditty bag.  This gave him training in the tools and seams that were required for maintaining the ships canvas. 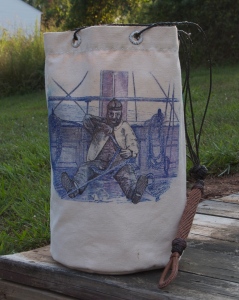 My Ditty Bag from a few years ago.

The flat (tabling) seam is king when it comes to sewing canvas sails.  The other common seam is the round seam.  Both of these are traditionally used in making a single ditty bag.  Another important skill covered by the ditty bag is hand sewn grommets.  Before the advent of the pressed metal two-piece grommet, if you needed a whole through canvas you had to install a hand sewn grommet.  Not as quick as the modern metal version but very strong when done correctly.  Another skill that was sometimes employed in the ditty bag was the roping of an edge.  This is basically sewing a length of rope to the edge of canvas.  In sails it used as a reinforcement or control line.  In ditty bags, as well as canvas buckets, roping is added to the top rim as a reinforcement.  The other skills covered by the ditty bag relate to line work and knot tying.  Splicing was almost always covered as well as seizing.  The line and knot work of the ditty bag is where the sailor could show off his skills and make the bag his own.  More often though the handles were simple and functional.

A while back I wrote about using lengths of twill tape to “clamp” small projects.  It worked great for me.  Consequently I have, and will be adding, several lengths of this twill tape to my shop.  So what I need is a storage container.  My first thought was to make a small box out of wood.  That would work fine but I’m running out of horizontal surfaces on which to store things.  So I decided that I needed something that I could hang on the wall when not needed and then transfer to the bench when in use.  Since I haven’t done any canvas work lately this would be the perfect project to get my hands back into it.

This project is not a traditional ditty bag but employs many of the skills required plus a little woodworking.  There is far too much information for this post to be a “how-to”.  Instead I thought it would be a good way to introduce you to the possibilities when working with canvas.  If I’ve peaked you interest all the skills are covered in the book “The Sailmaker’s Apprentice” by Emiliano Marino.

After a little sketching I decided that my storage bag should be 6″ in diameter and 9″ tall.  That should be plenty big for what I need it to do.  I’ll be making this from heavy #8(18oz) cotton canvas.  This will result in a stiff sided bag that will remain open on its own.  The twill tape weighs almost nothing.  I decided that a wooden bottom, in lieu of the traditional canvas, would anchor and stabilize the storage bag when it was sitting on my bench.  I’m also going to add a roping to the top edge to further ensure that the bag will stand open.

Here are the tools and most of the materials that I will be using.

Here is the plan.

Canvas marked and cut to size. 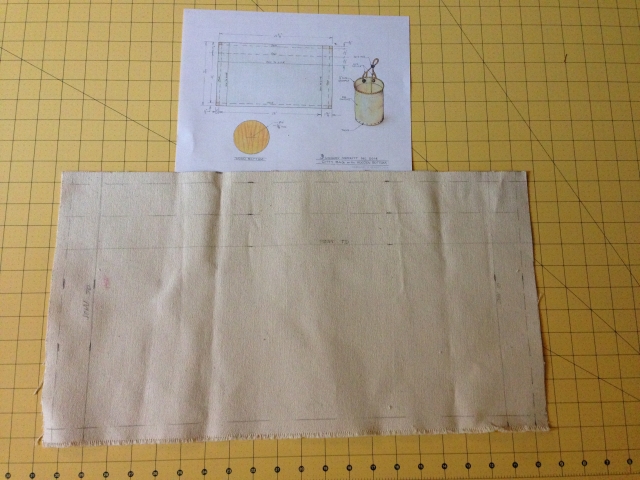 After seaming the canvas into a tube, I folded the top portion down and seamed it into place.  A seaming palm is a must for this type of work.

Seaming is completed.  I’m a little rusty but it will easily last the rest of my life.

Grommets laid up from three strand rope and twine and they are ready for installation. 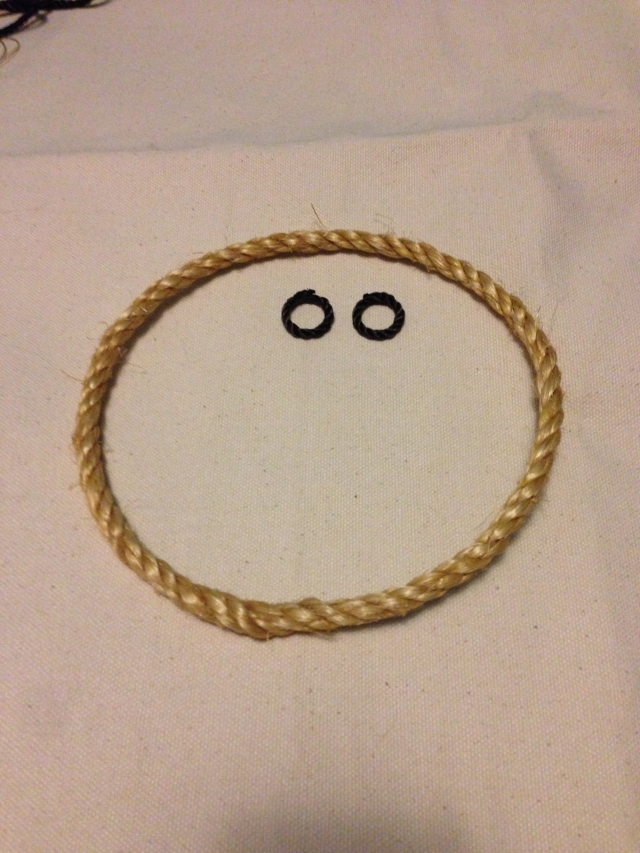 I think that’s a pretty good start.  In the next post I’ll have the grommets, handle and wood bottom installed.  At least I should.

12 Responses to Ditty Bag with a Wooden Bottom-Progress 1