My affinity for Japanese tools and methods began several years ago when I first read Scott Landis’ “The Workbench Book” that  I had checked out of the local library.  For you younger readers, the library is how us old folks used to get our hands on books if the local book store didn’t have what we were looking for.  No digital download or instant access.  Just go to the library and hope for the best.  Anyway, in that book there is a photograph of Tosio Odate working with low horses in his shop.  That image sparked something in me.

In that image I saw a completely new way of woodworking.  Seemingly simple and fluid.  I read and re-read that section of the book many, many times.  I paid several library fines because of that book.  At that time the book was the only insight available to me on Japanese woodworking.  It wasn’t until much latter that, with the internet, I was able to finally gain more knowledge of and even access to Japanese methods and tools.

My first purchase was a Shark brand replaceable blade Ryoba saw.  The first time I used I knew that the pull stroke was for me.  That saw cut every piece of wood when I built my current shop and is still used for cutting plywood panels for my projects.  I’ve never replaced the blade and it’s still razor sharp.  I’ve since purchased Gyokucho replaceable ryoba.  They are more refined, better balanced and cut very, very well.  But this post isn’t about Japanese saws.

A few Christmases ago I was gifted three Japanese planes (kanna).  A regular 65mm kanna, a small block plane and a sole conditioning plane.  In my enthusiasm and ignorance I promptly made a mess of them.  Sharpening was easy.  I could get the blades razor sharp, but fitting the chip breaker to the blade and the blade set to the dai (body) of the plane was a disaster.  I had read all the information I could get my hands on, but still lacked the basic understanding as to how all of the parts worked together.  I could get them to plane wood, but only at a rudimentary level.  I set them aside and went back to using their western counterparts.  Every few months I would take them out and fettle a little more, but still no real success.

Still firmly convinced that a pull plane is something that I need to add to my tool set I began considering building a Krenov style plane.  I read as much as I could find and asked questions (thanks for taking the time to answer them Bill).  I was ready to order a Hock blade set but just couldn’t bring myself to do it until I had one more go at the kanna.

After several hours of reading and watching I was ready to try yet again to make these “simple” planes perform.  I decided to tackle the block plane first.  I apologize now for the lack of photos for this process.  Once I started, I became engrossed in what I was doing.  I’ll do better on the large kanna.

The first step was to correct or at least mitigate any damage I had done up to this point.  The blade of a kanna is wedged shaped and is self wedging in the dai block.  When you first receive a new kanna the blade is generally too tight.  The idea is that you should fit the blade by slowly removing material from the blade bed of the dai.  Properly done, the blade, when installed with hand pressure only, should still be 4-5mm short of protruding through the mouth of the dai.  I screwed that up long ago.  The blade of my block plane is far too loose.  The common remedy for this is to glue a strip of paper or a wood shim to the blade bed.  I opted for the paper shim.

Blade protrudes through the mouth with just hand pressure. 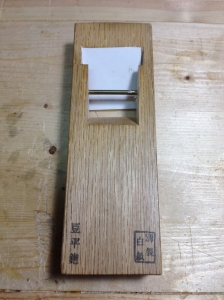 The paper shim tightened the fit to the recommended position. Then I concentrated on the fit between the bad and the chip breaker.

The Japanese version is the same as all other versions of planes that have a chipbreaker or  cap iron.  The leading edge of the chipbreaker must fully mate to the back of the blade.  I had worked on this area before so the two mated pretty well already.  All I needed to do was touch it up a little.

I then installed the blade and chipbreaker into the dai block tapping them down until they were just shy of coming thru the mouth.  Using sandpaper on a glass plate, I sanded the sole until it was dead flat.  A Japanese plane sole is conditioned to that it only contacts the surface of  the wood in two or three places depending on how it is to be used.  I decided to condition this one for three contact points.  One at the toe, one at the heel and one are just in front of the mouth.  To achieve this I used a card scraper and removed just a very little bit of material from the areas between those points.  Checking my work with the edge of my square.

I then removed the blade and honed it once more.  Time to see if my work will pay off.  I tapped the blade down until it just began to protrude through the mouth and checked that it was protruding evenly.  Then I backed it off until I could no longer see it and tried for a shaving.  No shaving.  Tapped the blade down a little.  No shaving.  Tapped again.  I pulled and a shaving jumped from the mouth of the plane.  Thick, but a shaving.  Then I backed the blade up a little and installed the chipbreaker.  I tapped it down as close to the edge of the blade as I dared.  Pulled the plane and got a wispy, but curled shaving.  One more light tap on the chipbreaker and I got this from my piece of cherry…. 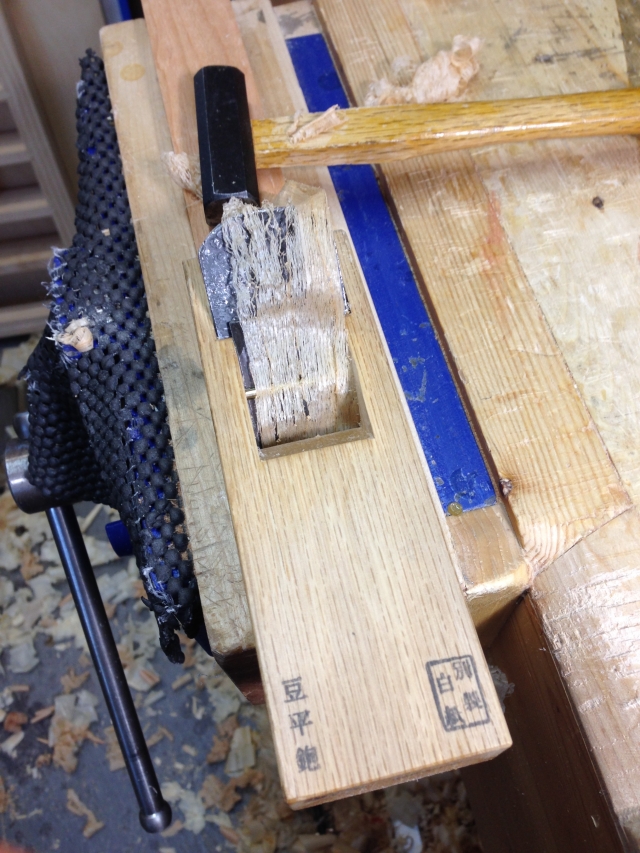 Not perfect, but I’ll take it!  There is still some fiddling I can do to fine tune it from this point.  My enthusiasm for these planes is back and I’m excited to go to work on my larger kanna.  I’ll try to do a better job with taking photos of that process.

This entry was posted in 5-Tools and tagged Kanna. Bookmark the permalink.