I don’t remember the first time I saw or heard a cigar box guitar. I’m sure it must have been on YouTube though. Like many of my projects, the seed was planted somewhere along the way and finally broke to the surface.

So, what is a cigar box guitar? Well, it is exactly what it says it is. A guitar fashioned using a cigar box for the body and a stick of wood for the neck. A crude instrument brought about by poverty and the basic human desire to make music. There are Civil War photos of soldiers with instruments fashioned from packing crates. The early blues greats (Blind Willy Johnson, John Lee Hooker, ect.) started on these types of instruments.

Apparently there is a resurgence in the popularity of the cigar box guitar. Not due to poverty, but due to people wanting to obtain that raw basic sound and to experience the freedom and joy of using on an instrument that they built with their own hands. A quick search of the internet will yield examples that run the full length of the spectrum. From simple ad crude to extremely refined. The vast majority of these new generation cigar box guitars are electrified. Again, you will find examples running the full spectrum. From simple ceramic piezo pickups, crude hand made magnetic pickups and to the best magnetic pickups that can be had.

The folks who build and play these instruments collectively refer to themselves as the Cigar Box Nation and claim that it is a cigar box guitar revolution. Their motto is:

“there are no rules”

Hmmm, this sounds like a familiar idea. Bucking the current convention and getting back to basics in order to create. Rings like a bit of anarchy, don’t you think?

There is far too much information for me to discuss all of the research I have done on this. A simple internet search should give you just about anything you want to know. Instead, I’ll hit the pertinent information.

Any wooden box will work. Scrounge it, make it or buy it. Generally speaking, the bigger the box, the bigger the volume. The thinner the resonating face, the better the tonal quality will be. The “perfect” box doesn’t exist. Don’t waste you time looking for it.

Most cigar box guitars are either three or four stings and you will need some way to tension the strings. I have seen a whole lot of examples trying to use anything but actual guitar tuners. Unless you already have something lying around that you can press into service as tuners, actual guitar tuners are the least expensive option here. Much simpler to install and use as well.

Any guitar strings, acoustic or electric, will work just fine. Get the cheapest ones you can find and experiment. That is part of the fun.

Scale length is the length of the vibrating portion of the string between the nut and the bridge. Guitar scale lengths generally fall between 23″-26″. With 25″ being a good average.

To fret or not to fret…no frets means you will need a slide. Frets require a few more tools and supplies. There are pros and cons to both. Either way you will need to know where the frets go for your chosen scale length. There is a simple mathematic calculation that you can use (scale length x ,???? = distance to first fret). Then apply the same calculation substituting the distance from the previous fret. On a calculator you just need to keep hitting the (=) button. Alternately you can simply use an online calculator specifically made for the task.

Which frets you mark/use is another place for experimentation. The chromatic scale is the standard that we are all familiar with. However, you could also use diatonic (think dulcimer) or pentatonic scales. Something to think about.

Attaching the neck to the box.

There are two basic methods for joining the neck to the box, stick-on-top or neck-through. Again, each have pros and cons. Stick-on-top is by far the simpler of the two and requires the least modification to the box. It does however present an acoustic problem whereby it deadens the soundboard (which I mostly solved). The neck-through is a bit more complicated, but makes freeing the soundboard much easier and also lends itself to installing magnetic pickups.

You don’t have to add a pickup to a cigar box guitar to enjoy playing it. But a pickup can add another dimension to it.

The simplest pickup is a ceramic disk piezo wired to a 1/4″ mono jack. These are inexpensive and simple to install. The piezo converts vibration into electrical energy to generate the sound. The drawback is that it picks up any and all vibrations. So every knock or rub against the guitar, not just the vibrations of the strings, is amplified. Careful mounting can mitigate this though.

Magnetic pickups are what most people associate with electric guitars. They work by the metal string vibrating over a magnet. This excites a copper winding around the magnets and produces an electrical signal. Magnetic pickups are much cleaner sounding because they are only amplifying the string vibrations. They can also produce a greater range of sounds depending on how they are made. The drawback is that they must be mounted directly under the strings. This requires a large notch in the neck thus requiring some sort of reinforcement to the neck to maintain strength.

So there are the basics. In Part 2 I’ll detail my builds for cigar box and license plate guitars. Until then, I’ll leave you my design drawing for a three string cigar box guitar to digest. 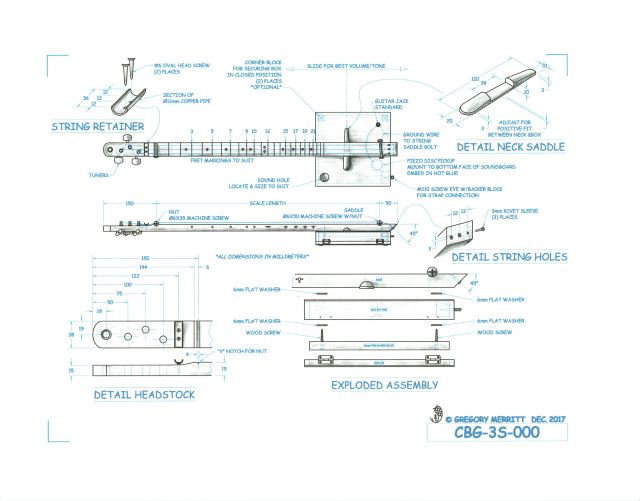