A trip to the Home Depot resulted in a decent haul.  After rooting thru the stacks of #2 mystery pine, I managed to pull out one 1x12x6′ and two 1x12x4′ boards that should yield all of the timber needed for this project.  I’m not overly picky when going thru the stacks.  It’s #2 grade after all.  I typically reject any boards with knots on their edges.  Any with loose knots and any that show signs of a twist.  I learned that lesson long ago with this marginal lumber.  No matter what I did to remove twist from a board, it kept coming back.  Not good and not worth the hassle.  Anyway, here is what a drug home. 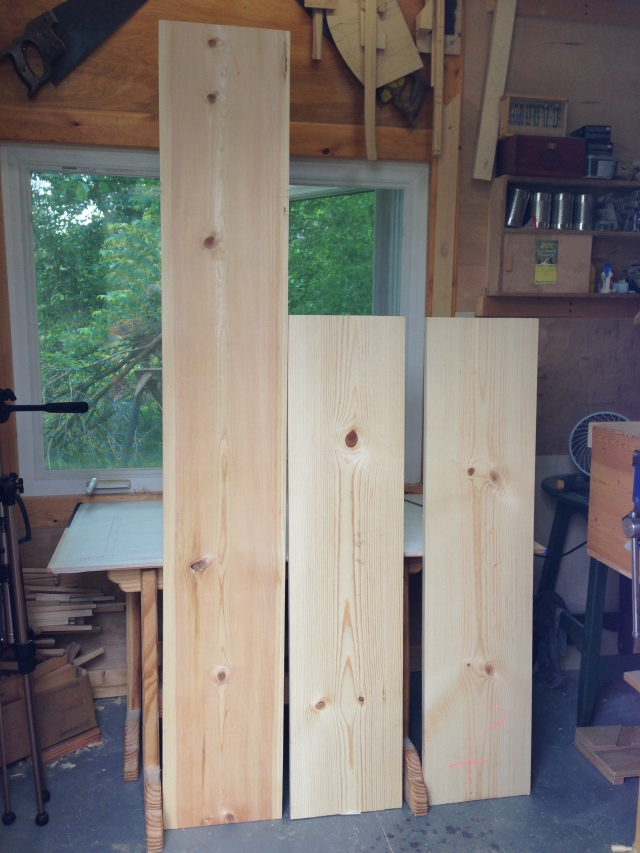 The first order of business this morning was to convert my proportional drawing into a working full-size shop drawing.  I’ve talked about this before, but it’s worth repeating.  I design with proportions to make scaling a project much easier.  For example.  Let’s say I want one of these boxes to be a specific height.  I’ll simply plug in that height and use the dividers to break that distance down to find all of the other distances.  So, suppose the required height is 15-3/4″.  The design drawing shows that the proportional height of the box is 9D (modules).  Therefore, 15.75/9=1-3/4″.  Then I would create a module key based on 1-3/4″ and then simply step of all the other distances.

For this project I’m using my usual 36mm for the module.  To start the full-size drawing I first created a module key based on 36mm.

Once the module key was established it was quick and easy to step off all of the required distances.  Well…mostly.  I had a couple of missteps as evidenced by the presence of correction fluid on my drawing.

So you can have an idea of scale. 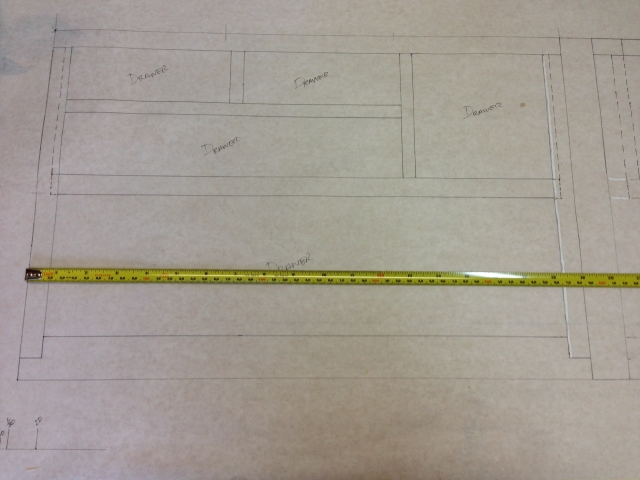 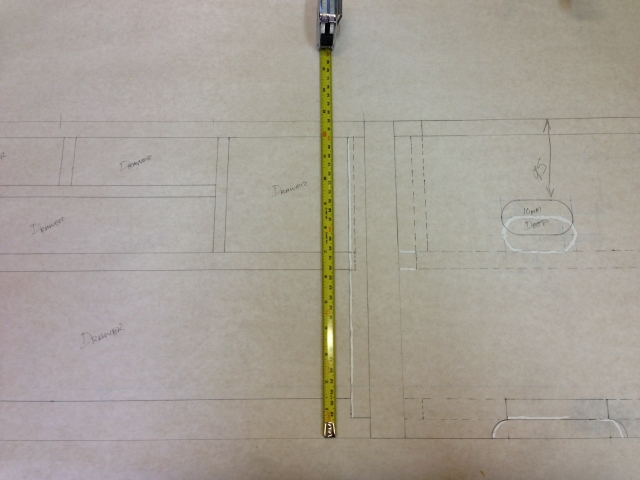 So why do I design around 36mm?  Simply because it breaks down into the standard thickness of timber as well as the widths of chisels that I own. i.e. 6mm, 9mm, 12mm, and 18mm.  No magic involved just practicality.  I also find that any scaling of a project rarely changes the material thickness enough to warrant matching the resultant scaled thicknesses.  That’s probably clear as mud.  It’s far easier to do than to explain.  Just shoot me questions if you want to know more or need clarity.

I purchased the 6′ board so that I could fabricate the entire outer case with the grain running continuously around the box.  Starting at one end of the board I laid out the end, then the top, then the other end and finally the bottom.  I paid particular attention to the knots.  The last this you want is to try to cut joinery thru a knot.  I was able to avoid almost all of them.  The only knot that landed on a joint fell in the waste portion of a finger joint on one of the end panels.  Sometimes I get lucky.

I apologize for the lack of progress photos.  Since this is a new design I was concentrating on not screwing it up.

The next step was to surface plane and then square the ends of all the pieces on the shooting board.  The ends were made to be the exact same height and width.  The bottom and top received the same treatment.

I began the joinery with the dados in the end pieces.  Marking one end panel directly from the full-size drawing and then ganging it with the opposite end panel to transfer the marks.

Dados marked and ready to be cut.

Never hurts to double-check against the drawing.

There are multiple ways to cut a dado joint.  The end result is all that matters not how you got there.  For the record, I knifed, then chopped, then pared and finally leveled the bottoms with a router plane.

Cutting finger joints is no different than thru dovetails.  Less the angles of course.  Mark, saw and chop the portions on one piece and transfer to the mating piece and repeat.  I’m working in pine and wood compression is my friend.  The housed portion of the bottom added a little extra chance of screwing it up but not too much.

Up to this point I left all of the pieces the exact same width.  I think this made it much easier to keeping the joinery layout correct.  The top still needs the front trimmed back to make way for the lift out front panel and it needs a rebate at the rear to house the back panels.  The end panels need their width reduced at the rear to make way for the back panels as well.  I already trimmed the front edge of the bottom panel to make way for the skirt.  If I had made all the pieces their finished width from the start, I guarantee that I would have made a mess of the joinery. 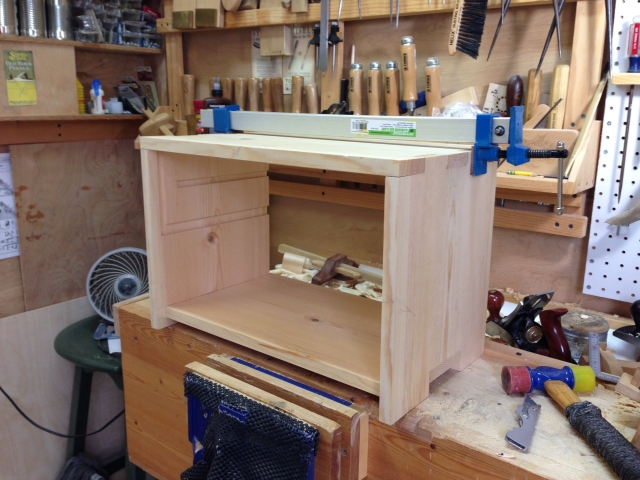 Not a bad start if I do say so myself.  I’ll piece at it this week after work as time permits and go at it hard again next weekend.