After an additional couple of hours I finished all of the lacing on the box.  Now I had to tackle the lid.  Even with all of my internet searching I wasn’t able to find any details on how these types of lids are to be fitted.  So I went in totally blind with only a vague idea as to how it was supposed to work.

I began by cutting the lid to rough width and length.  The width being wide enough toleave me with a 1/4″ overhang on the front and rear.  The length was a 1/2″ longer than the distance from outside of horn to outside of horn.  Then I notched each end to loosely fit over the horns.  The distance between the notches I cut to match the distance from inside of horn to inside of horn.  I knew this would be too tight but gave me some room for figuring out how it should work.  With a gouge and rasp I began trimming the ends of the notches I continued until each notch would bottom out on the horns.  With that done, the lid was still too tight to snap into place.  The idea is that the lid spreads the horns just enough to snap into place.  Once in place the lid still needs to be held in place by the horns.  It’s a fine line, so slow was the going was slow.  So I used a rasp to remove equal amounts from each notch until the lid finally snapped into place.  I’ll be damned it worked!

I then fiddled with the general shape until I was happy with it.  A heavy bevel all around the top edge lightened the look.  This was done mostly with my smoothing plane.  Plus a little chisel and sandpaper work.  Then I added some kolrosing decoration and a decorative band.  All of the kolrosing was done with a knife and two sizes of gouges.  The decorative band was made with a homemade steel stamp.  Just a chunk of steel with a pattern filed into the end.  I then drilled the holes for the handle.  The handle is pretty simple.  A three strand braid with double diamond knots on each end.

The finish is a couple of coats of Tried and True Original.  Plus lots of buffing with steel wool and a soft cloth. 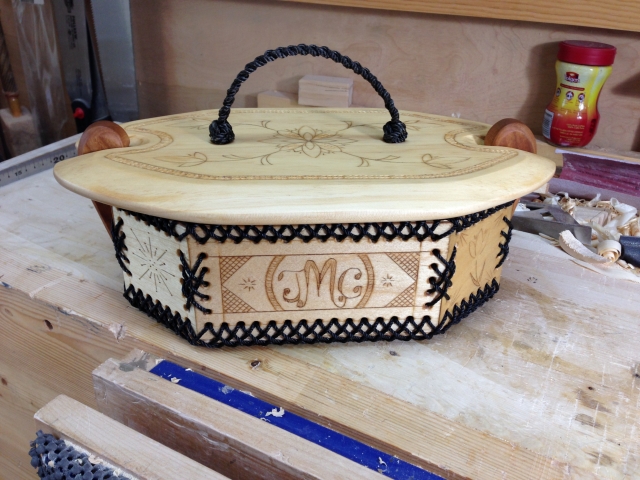 I’m really happy with how this experiment turned out.  A lot of this work I can do inside the house.  Which is perfect now that the weather has turned cold.  I’ll be going thru my notes and refining a few points, but I’ll be building more of these for sure.  The lid really sells it for me.  It’s a simple but ingenious solution for adding a lid to a box.

Even with my poor to non-existent video skills, I was able to make a video of the lid in action.

This entry was posted in Design, Knot Tying, Stitched Box and tagged kolrosing. Bookmark the permalink.

15 Responses to Stitch in Time Box-Progress 3