I had an easy, slow paced day in the shop.  No rush.  Just enjoyed my time working wood and making.  My goal today was to chop the mortises in the front cross rails and to fit the corresponding post tenons. 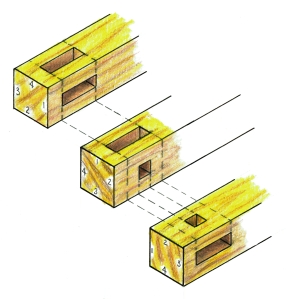 I had set out the joinery for these pieces a few days ago and was able to jump right in with chopping the mortises.  The main mortise is a standard thru mortise.  There is a mortise that intersects with it perpendicularly.  That mortise is reduced two thirds of the way thru to a square profile.  Its this intersection that must be given attention.  I can’t just chop one mortise and then the other.  If I do so when the second mortise meets the hollow of the first there is the potential for spelching (breakout) of the unsupported fibers.  In the past I have inserted a scrap block into the first mortise and used that to support the fibers.  Today I tried something different.  Today I chopped the full width mortise only one third of the way thru from each side.  This left the center section in tact.  Then I chopped the wide section of the second mortise.  I only needed to insert the scrap block to support the fibers when chopping the small square mortise portion of the joint.  This worked great and I think made the process a little quicker. 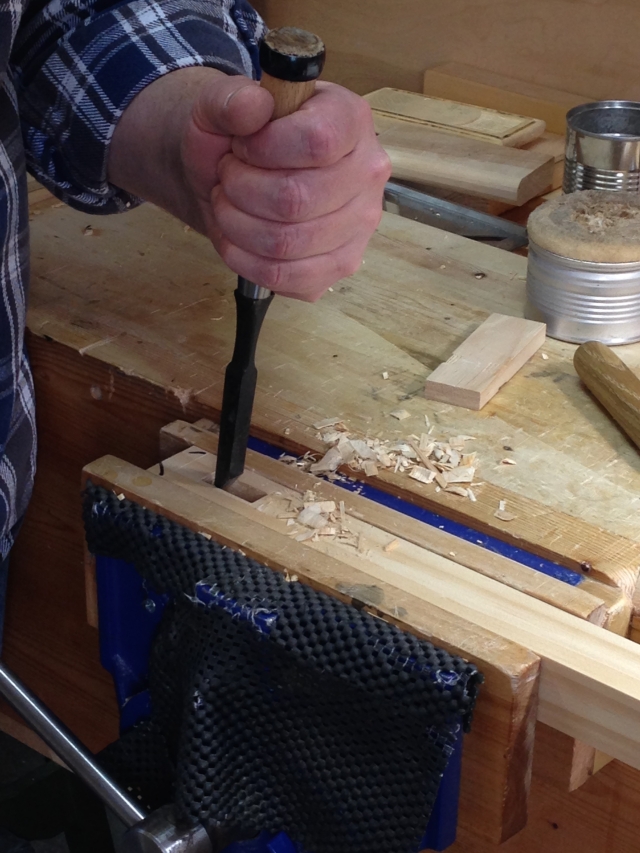 I also used a brace and bit to remove the bulk of the waste for the square portion. 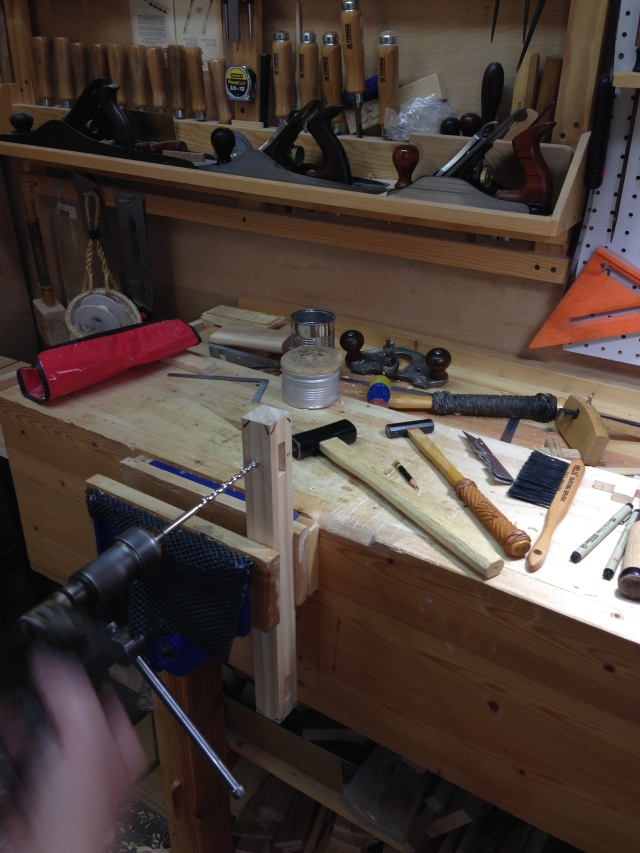 Then inserted the scrap block and chopped out the remaining waste.

With all of the mortises chopped in the two front rails, I began cutting and fitting the corresponding post tenons.  Standard SOP for these.  Just saw on the waste side of the layout line.

Something that I haven’t mentioned before is that for the last few projects I have only used a single saw.  Mostly an experiment to test the efficacy of having just a single saw.  Thus eliminating the need for multiple saws and increased expense for those starting out.  The saw that I have been using is a Japanese replaceable blade ryoba saw.  This is a pull saw and has two cutting edges.  One rip and one crosscut.  By the end of this project I think I will be ready to discuss the results of my experiment.

Obviously I’m not a hard-line traditionalist.  I own western style saws and know how to sharpen them.  I can use them without any issues.  Personally though, I find the Japanese saws more comfortable to use and I find the pull stroke more intuitive for accurate cuts.  Your mileage will vary.

Anyway, once the tenon was sawed and fitted there needs to be a mortise chopped thru it to mate with the square mortise in the rail.  Its this intersecting tenon that serves to lock the corner joint together.  To locate the mortise in the tenon I simply installed the post into the rail delineated the outline with a chisel using the rail mortise as my guide.  Then removed the post and transferred the marks to the opposite side of the tenon.  Finishing by chopping the mortise same as any other.  Again a scrap block was employed to support the tenon during the process. 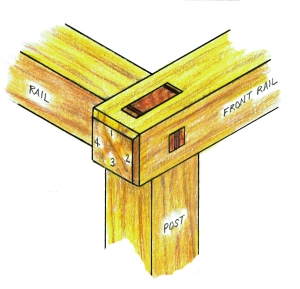 I then repeated the process for the remaining three corners of the front frame and dry fit the assembly.  The dry fit looks good.  The shoulders all seated and the assembly is square.

Tomorrow I’ll repeat the process on the rear frame.