The weather here has been unbearable. Several days in a row the heat index went over 100F.  Having temperatures in the 90’s is tough but doable.  However, when you factor in humidity levels in the high 60% to above 70%, conditions are just too much for working in an unconditioned space.  So not much has been happening here on the woodworking front.  I have fought the good fight though.  Working for 15-20 minutes right after work just to get my fix in.  This limited time means that the project has to be simple.

The tenugui hanger that I finished recently has been a big hit with those who have seen it.  This favorable response set me to thinking that the tenugui hanger might be a good choice for Christmas presents this year.  It’s simple to make and gives me a way to use up some of the off cuts that are piling up out of control.

So I began this next tenugui hanger by fishing a scrap out of the pile.  What I pulled out was a length of sassafras left over from a clock project a few years ago.  I love working with this stuff.  It responds well to sharp tools, it has an open mild grain and smells wonderful. Anyway, I began cutting all of the parts per my drawing that I have posted.  At a few minutes per session it has taken over a week to get the thing completed and ready for finish.

The finish on this one is a coat of my tinted linseed oil then a polish with the polissoir and beeswax.  The sassafras is just hard enough that it polishes well and the undercoat of oil added an element of depth.

On my first tenugui hanger I included a bit of decorative knot work attached to the o-rings of the lower stretcher.   I think it adds a bit something-something to the overall assembly.  The knot that I used on that first one was a Japanese Tassel knot tied in black paracord.  The black worked well with the brown and orange tones of the seasoned pine that I used on the first hanger.  The sassafras has a golden tone to it and I chose to run with it.  I also chose to try out a different knot.  So for this hanger I used gold paracord tied into a Chinese Good Luck knot.  The knot is really just a slight variation of the Japanese Tassel knot but raises the “fancy” up a notch or two.  Both knots are super easy to tie, so don’t be intimidated.  It may take you a couple of tries, but you’ll get it I’m sure.  I finished the cords off with Celtic button knots and frayed the tag ends to give the look of a tassel.  I did go the extra mile with the Chinese Good Luck knots and tied them in opposite directions so that they are mirror images of each other.  To add a bit of contrast and a bit of brown tone, I soaked the center portions of the knots with CA glue.  I think they look pretty snazzy!

The final assembly with a Fall themed tenugui. 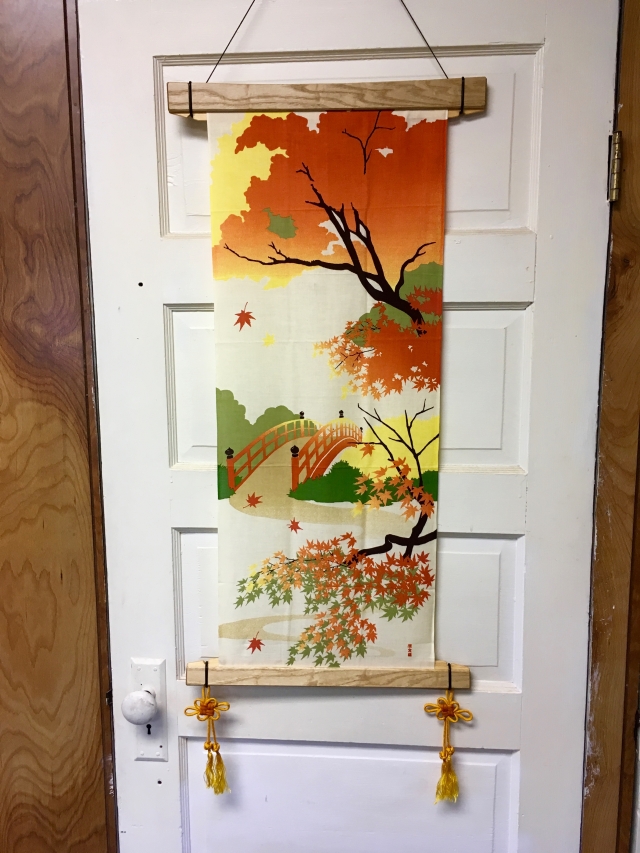 This is a simple project and adds a bit of artistic value when hung.  I made this to hang a specific strip of cloth but any piece of cloth that you find beautiful would work just as well.  Change the shape of the stretches and add a regional knot and you could make this thing work in just about every home and culture.  You could also use this hanger to display a linen calendar.  Something for you to think about.

Anyway, that’s one present ready for the Christmas season.