For the handful of you that read this drivel on a regular basis you are probably starting to think that I have developed age-onset ADHD or maybe worse.  First I droned on about nightstands, then a bookcase and now a side table.  Too much time out of the shop but I am now remedying that little problem.  To put the new shop area through its paces I decided to tackle a simple project from the “need” list and that is a side table.  This will be built around the same style and finishing of the end tables that I built last year.  It will be a little lower, a little wider and a little shorter.  Hows that for specifics?  We have two low-setting mid-century chairs in our living room and we need this little table to set between them.  So I took a scrap of wood into the house and marked the desired height and maximum depth on it and went back to the shop.

Using the original proportional layout (below) that I used for the end tables, I worked out a full-size end view for this new side table. 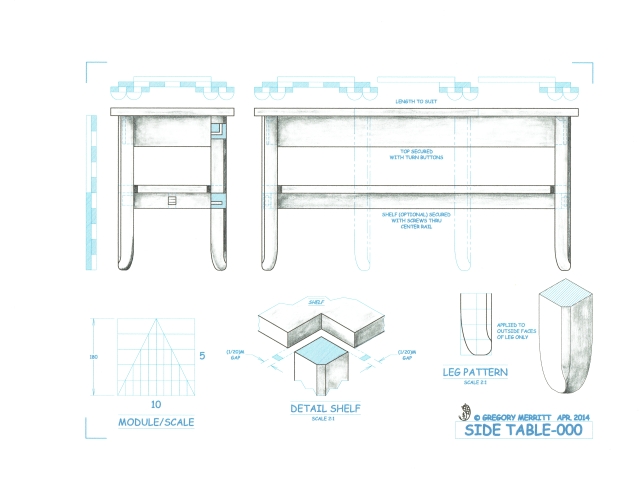 A quick look through the wood pile and I realized that I had enough stock lying around to build this entire table.  Granted some of that material will be from lumber that I salvaged from a coffee table that I built years ago and has sentimental value.  So after work on Friday I began dimensioning stock, laying out of joinery and I even managed to chop a few mortises.

Here are the legs marked out and ready for the chopping of the mortises.

This morning I continued the joinery work and quickly had the end rails fitted to the legs.

Then the side rails.

Then the bottom center rail. 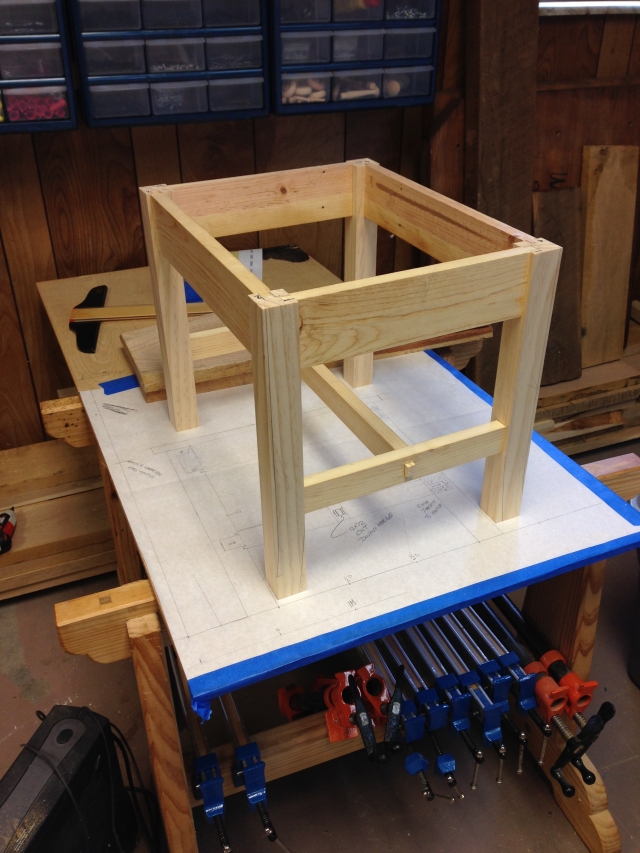 A quick shaping of the legs, slathering on of glue and the assembled base is in the clamps for the night and it’s still daylight outside.

This next bit will sound like bragging, OK it is a little, but I can’t get over how quickly this went for me.  Less than a full day and I have an assembled table base, albeit a small one.  I do apologize for the lack of “action” photos but I was in a groove and getting used to the new shop space.

Tomorrow I’ll glue up the oak panel for the top and paint the base with a couple of coats of barn red milk paint.

This entry was posted in Side Table and tagged end table, milk paint, mortise, table, tenon. Bookmark the permalink.